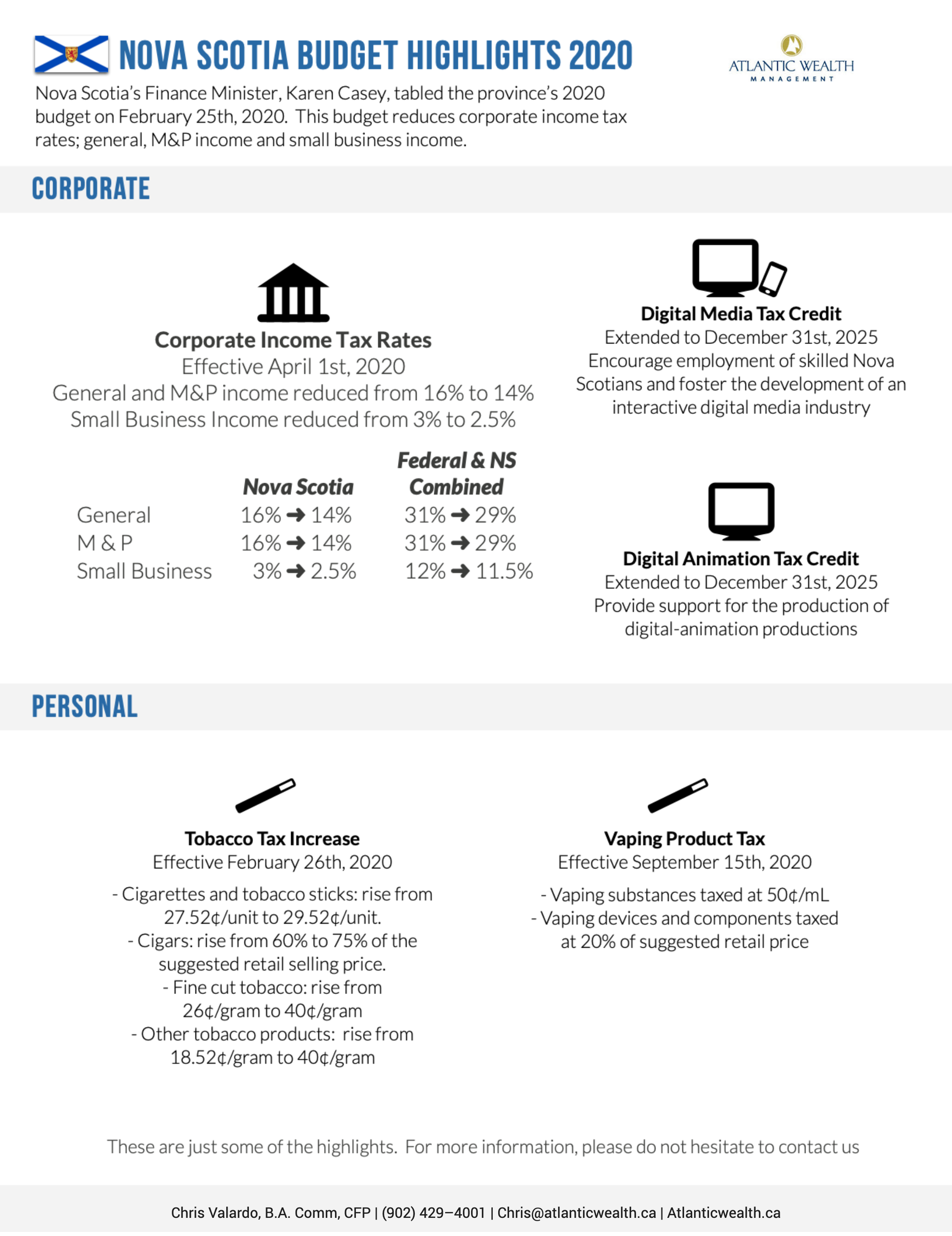 Effective April 1, 2020, the province will reduce the general corporate income tax rate from 16 per cent to 14 per cent.

Effective April 1, 2020, the province will reduce the small business corporate income tax rate from 3.0 per cent to 2.5 per cent.

From 2011 to 2014 the small business corporate income tax rate was reduced by one-half percentage point each year—dropping the rate from 5 per cent to 3 per cent. The small business rate is available on the first $500,000 of active business income by Canadian Controlled Private Corporations (CCPCs) with taxable capital of less than $10 million. The rate reduction will provide small businesses in the province with $10.5 million in 2020–21.

The DMTC is a refundable corporate income tax credit. It was introduced in 2007 to encourage the employment of skilled Nova Scotians and to foster the development of an interactive digital media industry in the province. Since its introduction, the province has provided almost $54 million in tax credits across 675 applications.

The province will review the DMTC in consultation with the industry and stakeholders to ensure that the tax credit remains relevant and effective in an ever-changing digital technology environment.

The DATC is a refundable corporate income tax credit. It was introduced in 2015 to provide support for the production of digital-animation productions in the province. The tax credit, together with the Film and Television Production Incentive Fund, was put in place to replace the former Film Industry Tax Credit. Since its introduction, the province has approved Part A applications totaling almost $45 million across 45 applications.

The province will review the DATC to ensure that the tax credit continues to support the digital animation industry.

Effective February 26, 2020, the province will increase the tax rates on all tobacco products sold in Nova Scotia.

The tax on cigars will rise from 60 per cent of the suggested retail selling price to 75 per cent. Again, this is in line with tax rates applicable to cigars across the country.

The tax increases are expected to generate approximately $17.4 million in revenues for 2020–21.

Effective September 15, 2020, the province will implement a tax on all vaping products

Vaping substances, including those that do not contain nicotine, will be taxed at the

rate of $0.50 per millilitre. The province has previously announced that it will ban

flavoured vaping liquids effective April 1, 2020. This is consistent with the province’s ban

on flavoured tobacco products. Vaping devices and their components will be taxed at a

rate of 20 per cent of their suggested retail selling price. Cannabis vaping substances

are taxed under the cannabis tax.

All retailers, wholesalers, and manufacturers of vaping products will be required to be

The full version of the Nova Scotia Budget can be found here: https://novascotia.ca/budget/